This is the first English translation of the Prolegomena iuris naturalis by Gottfried Achenwall (1719–1772). In this book, Achenwall presents the philosophical foundation for his comprehensive theory of natural law. The book is of interest not only because it provides the basis for a careful, systematic, and well-respected eighteenth-century theory of natural law in the Leibniz-Wolffian tradition, but also because it sheds important light on the work of Immanuel Kant. Achenwall’s work influenced Kant’s legal and political philosophy as well as his ethics, and it is indispensable for understanding Kant’s Feyerabend Lectures on Natural Law and his Metaphysics of Morals. The present volume complements the translation of Achenwall’s handbook, Natural Law.

Edited by Pauline Kleingeld,
Professor of Philosophy at the University of Groningen, the Netherlands

In September 2020, Pauline Kleingeld will be awarded the Spinoza Prize.

Translated by Corinna Vermeulen, PhD, a professional translator who has translated Latin works of Grotius, Descartes, and Spinoza.

The Hardcover version of this book (ISBN: 9789403422541) is available via  Uitgeverij kleine Uil, and all regular (internet) bookshops.

The first English translation of Achenwall’s handbook Natural Law: A Translation of the Textbook for Kant’s Lectures on Legal and Political Philosophy edited by Pauline Kleingeld, translated by Corinna Vermeulen, has  been published by Bloomsbury Academic in February 2020

Gottfried Achenwall (20 October 1719 – 1 May 1772) was a German philosopher, ARA historian, economist, jurist and statistician. He is counted among the inventors of statistics. 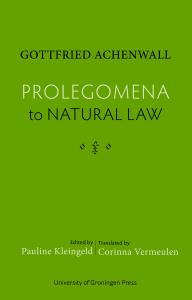